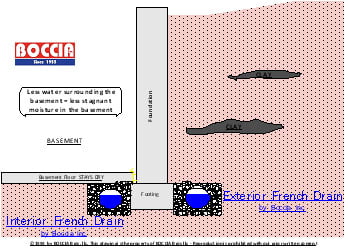 A French drain is the generic term often used to describe a drainage system installed at the base of the foundation wall.  Though a French drain can be installed outside, that often requires large excavations including the removal of driveways, patios and landscaping which can be very costly.  Also, piping installed outside can be damaged due to the large overlying dirt loads.  For these reasons, the interior French drain has become increasing more popular due to its tremendous success at resolving basement waterproofing problems and is the focus of this article.

A well-designed French drain will include filtered perforated polyethylene round pipe, a gravel envelope, vapor barrier and cove drainage. Once properly placed below the floor, the system will essentially drain out moisture from below the house before it has the opportunity to enter your basement. This water would have otherwise led to high basement humidity, leaks, mold and a musty basement smell.  The following are the critical components to a properly installed drainage system:

French drains do not typically come standard in new homes because until recently, basements were mostly used as utility, storage or laundry space. Leaking water was mopped up from the concrete floor and forgotten about. Now however, with larger numbers of people looking to transform their basements into living space, French drains are critical at keeping this space dry.

Organic building material such as sheetrock, wood framing and carpeting absorbs moisture in the presence of elevated moisture levels and is conducive to the proliferation of mold and fungal matter.   For this reason it is important to install French Drains before finishing the basement to avoid expensive water and mold restoration. Luckily, once you have a French drain installed, it requires little to no maintenance and should last you a lifetime.   Installed correctly, a French drain (i.e. sub-floor drainage system, hollow kick mold system) works under your house throughout the year offering you protection from flash floods, melting snowstorms and rising water tables.  It works to improve the overall environment of the basement by keeping the soil under your basement dry.

It is common to see French Drains on Long Island, Queens, and across the New York Region.  The large amount of precipitation that we receive, combined with the common use of basements makes French Drains a popular solution to drainage issues and to help prevent basement flooding in Long Island and Queens.

Vincent Boccia of Boccia Inc., a professional engineer and leading waterproofing expert serving New York, explains what a French drain is and how it can be extremely useful to your home. 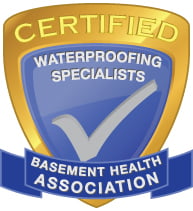 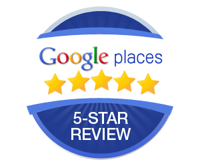 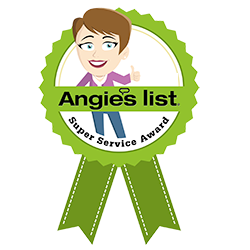